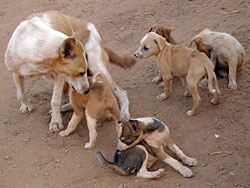 It was a sheer nightmare to dissuade my little daughter to stay away from puppies on streets. Specially when Giggly, the name which Juhi and her friends gave to a street dog, delivered six pups, all my daughter wanted was to be with them all the time! Well out of six four survived. Giggly got the much needed attention from the kids. Juhi ensured that the pups get enough milk albeit from her own share. She emptied her glass of milk faster than ever!

The four pups were named as Sumo, Wrestler, Mickey and Barbie. The four legged creatures gradually also got fond of the kids. Juhi exactly knew if all whereabouts of the pups. As days passed I also grew less concerned and occasionally asked Juhi about the pups. She described their activities in the most animated way...I enjoyed it!

One day she quiet sadly mentioned that Wrestler had gone missing. A few days after Sumo was found dead in some one's garden. But the sight of Barbie cheered her up. Barbie gave Juhi the great attention as she wagged her little furry extension while Juhi came back from school or followed her to the park, too. "Maa, Barbie seems to be sad today, I think she is missing Sumo and Wrestler, or 'Maa Barbie fought with Mickey today, or, 'Maa, Barbie is hungry today, we must give food to her....," was common observations.

One morning Barbie was found dead in front of our house. She lay motionless beside a bush. I wanted desperately that her body be removed before Juhi arrives from school. But Juhi saw her friend dead on her way back from school.

She didnot ask me anything. To my surprise she said,' Maa, Barbie has met her other siblings in Heaven", and continued in unfaltering tone "I have to love Mickey more now, she will be alone". I thought, my daughter has the insight of life and death already. Relieved too, because I was worried that she would be shocked and it would be difficult for me to make her understand the reality.
So,life went on usual for the day.

At midnight Juhi woke me up. 'Maa, I will punish the car which killed Barbie...how can I get her back?...Will she never come back?...May be she is living...

All through the day my little girl tried to be brave but with the advent of darkness her little soul was awakened.I presumed her to be pragmatic. But I was wrong. How can a seven year old be so? Could we understand the meaning of the cycle of birth and death and accept death?
Her grief knew no bounds...she couldn't any more wear the garb of maturity...she is a child and will always be ...so are we. It will always be difficult for us to accept the vacuum created by  someone's departure forever.
at August 23, 2012 1 comment: Links to this post

Radio of my Childhood


A simple box from where I heard sounds -- magic I thought it to be when I was little. And to me my grandmother was the magician. With simple tuning of the knobs she could vary sounds and programmes from the box. What a wonder! And that wonder box was called radio. 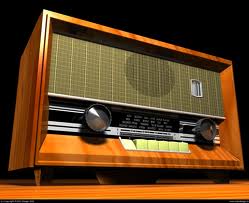 Grandma's favorite programme was Bibidh Bharati in the morning. Where she listened to news bulletin and then songs. She placed the radio atop the window pane in the kitchen. I think it was merely an attempt to put it out of my reach! I was her blue eyed brat...
She woke up everyday at 4 o' clock in the morning, busy herself in 'puja' and then get involved in kitchen. She had a penchant for cooking a variety of dishes and that too in limited resources. How could she do it..well that's a mystery because now even amongst plenty, attimes I fail to choose. She cooked in typical Barishal style, a district of Bangladesh, where she got married at the tender age of 18.
Grandma kept track of time while working and tuned in the radio on time. My immediate interest was morning delicious breakfast as she would oblige to any of my demands while listening to her favorite programmes. I knew names of all newsreaders by heart-amongst all Debdulal Bandopadhyaya was my favorite. His profound and heavy voice was quite appealing and he had the power even to arrest a child's attention.

Though grandma endeavoured a lot to put me to sleep in the afternoon so that she could relax while hearing the audio drama, I always feigned sleep and took interest in her radio programme. I still remember couple of audio dramas which etched an indelible mark in my childhood memory.
Though in regular circumstances radio timings were fixed in house, during election period and announcement of poll results radio had a extended run. Mood of the house changed constantly after each announcement. I didn't understand anything but that radio was on for a long time gave me immense pleasure. Reason still unknown to me. It may be that I had a good escape from my studies and everyone ignored my mischiefs.  Whatever it may be, I give  radio the ultimate credit.

I secretly tried to tune the knobs attimes but most of the time caught by grandma. Invariably my efforts gave away to some cacophonous sounds while grandma always could tune into proper stations.
I was close to grandma and her radio too. She hardly berated me, just gave a slight pat on my back...more of love than anything.

My magician was gone on 1st July 2002. Ten long years have passed by. Radio programmes have undergone varied changes and so is the look of radio. But till today, whenever I hear a sound from a radio I visualize my grandma tuning on the knobs and  then the magic began.....

Times when childhood memories ruffles my otherwise calmness and I miss the loving ones I feel may be my grandma is still listening to her favorite radio programmes and somewhere I can pass the message how much  I love and miss her...
at July 01, 2012 No comments:

Journey of a Love Mug 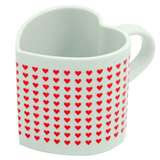 We all do crazy things when in love! I did too. Once I bought a white mug and secretly took the same to the bathroom. Reason - my mom was still unawares ( I deliberately kept her in dark)  about my whirlwind romance.
I diligently and meticulously took pencil, rubber, paint, brush, nail polish, cotton and hair dryer inside the loo. I wanted to put a personal touch to the mug. Special gift to be sent to Kashmir and that too from Kolkata. I drew lips (indicating kisses), painted hearts, wrote love messages with nail polish and dried all quickly with full blow of hairdryer. Under wraps I kept it in my bag and en-route my college I halted at Post Office.
Contrary to belief the postal department helped me! The hard cardborad box was stuffed with cotton, and newspapers. As I mentioned on top as fragile glass item I sealed it with a kiss...and glue too.
With assurance it would not break on its journey I set off for my class.
After a few days an excited and happy voice from the other end of the phone confirmed the receipt of the love mug in one piece. I was delighted. Mom took notice of the same!

We got married. As true to belief in Infantry we got transferred to almost six stations in nine years. Created a happy family too with two additions. A daughter and a son!
While shifting trunks I stumbled upon a hard stuff very patiently put inside in pair of socks. I felt it so that I can judge it and not take the trouble to take it out. Accordingly either I will keep it or throw it and reduce the junk which keeps on mounting during every posting. Failing to guess, I took it out and to my utter surprise IT WAS THE LOVE MUG. 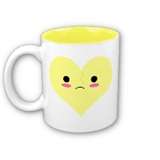 My daughter asked if she could keep it on her desk and my son wanted to play with it. I politely said 'NO'...I looked at my husband and said." we must keep this in the showcase in our bedroom...so that everyday we can feel the warmth of our love.." My voiced trailed as I went back to past. "Hey but it has crack and to better keep as a pen stand. It must be used.." my romantic husband sounded practical..." It can be a spoon holder too, didi..".wisely commented by my house-keeper...I retired from the scene placing the mug on table.

Next day morning I went to brush and surprisingly saw the Love Mug as a proud tooth brush holder...It's been put to practical use after nine long years! Its the first thing in the morning I can see. I felt cheerful that at least it is in prominence and out from oblivion after so many years. But Bathroom! May be Every Luv Mug has its own fate..

Wish I had the magic wand or what if God granted me three wishes right now...I would only want one and return the other two! I felt so when my two year old son unintentionally broke a new toy car (which  became his favorite within an hour) and brought it to me.

Silently gave me the car and the broken part. Ambivalent feelings going through him which prominently writ on his innocent face. He was sad because of the state of the car but he believed that his mummy can make everything all right! Alas! No way, I could not put the pieces together. The expression on his face changed. He was hurt more than angry. His faith had taken a hit. How could Mummy fail?

So God just want some spare magic to be given to mummies...at least to make a toddler believe that his hero would never fail him and that he can have complete trust.